Where have you gone Joe DiMaggio? 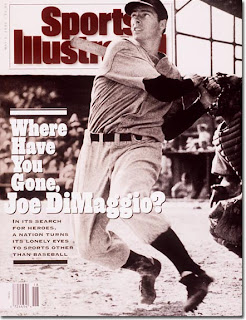 Hey, I remember that issue. It makes me want to fly back to Ontario and root through my half a dozen bins full of SI's from 1992-1998. You know, back when the magazine was GOOD. Anyways, on to the blog. The one that everybody involved in baseball hoped was clean and untainted. Alex Rodriguez. Guilty, by his own admission.
As everyone knows by know, A-Rod tested positive for banned substances back in 2003 when he was a Texas Ranger. He was one of over a hundred names to have failed tests that year. At this point would anybody be surprised by any name showing up in steroid talk?
With Rodriguez and his legacy now shrouded with taint, fans put their faith in Card's slugger Albert Pujols and hope to hell that he is clean.
Think of the legacies that are now tarnished because of their either alleged or proven cheating; Jose Canseco, Mark McGwire, Rafael Palmeiro, Roger Clemens, Andy Pettitte, Troy Glaus, Sammy Sosa, Barry Bonds, and now of course A-Rod. 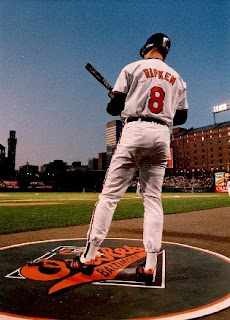 The game of baseball is now devoid of heroes. Which begs the question, who was the last true hero? My money is on Cal Ripken Jr. If it ever came to that he was a doper, I might completely lose my faith in humanity. But, come on. Ripken's numbers got worse as he got older, which doesn't happen much these days in the steroid era of the game.
As baseball fans, the baby-boomers had it good. They grew up in a golden time of the game, cheering on larger-than-life names like DiMaggio, Williams, Yastrzemski, Aaron, and Mantle. An innocent time for the game of baseball, where the most heinous things a player could do were drink, smoke, and womanize.
Despite all the blatant cheaters that this era of baseball will be known for, I still love the game. I know its tainted. But I can't stop being interested in something that I have loved since childhood. I just wish I was around to see the golden, clean era of the game. At least I'll always have Ripken. I hope.
Posted by Mark! at 12:04 PM

I don't know much about the history of baseball. But I do know that it has many eras. Like the segregation era, before blacks played in the league. This is the steriod era, where all players will be tainted with suspicion. I think it is time to cherish the few heroes we have left in baseball. Cal Ripken Jr. is one. But here are a few more that still embody the greatness, class, and hopefully untainted traits of heroes.

As a Yankee fan, I hope that Jeter will remain an untainted Hero. Also, Ichiro has been an incredible player. Most would agree he could have passed Pete Rose if he played his entire career in the Majors. Finally, the last great pitcher, Greg Maddux.

As far as I know, none of these players have even been linked to steriod suspicion. We should embrace them as the heroes of a dark era of Baseball.