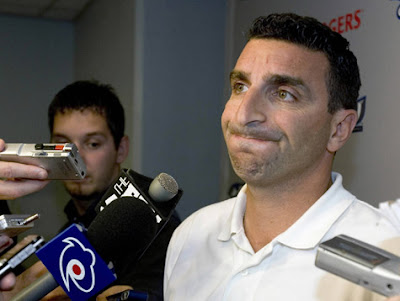 I can smell it.

The end is near for J.P. Ricciardi, and not a moment too soon.

The Jays are at the lowest point of their woeful season, one that started with so much false hope. A hot start out of the gate is the only reason this team isn't 20 games below .500.

The Roy Halladay fiasco will ultimately be the blow that breaks J.P's nose. And not
because he didn't trade Doc. Whether he should have or not can be debated over a few beers for a couple years to come.

No, what was wrong with the whole Halladay ordeal was the way Ricciardi handled the situation. He put everything out in the open and couldn't keep his trap shut, something that has been an all too common occurence during his almost decade-long tenure as Blue Jays G.M.

Sure, it helps the media out, spilling the beans that you are willing to trade Halladay, if, and only if, you get bowled over by an offer.

Obviously that didn't happen. Actually, J.P's asking price seemed to be too high by all accounts, as six teams were apparently very interested.
Boston and the Yankees are in the A.L. East, and Ricciardi wanted more from them if there was a deal to take place.
He wanted J.A. Haap and/or Kyle Drabek from the Phillies, but they were not willing to part with either.
He wanted FOUR current roster players from the Angels. They laughed at him.
The Brewers were interested, but rumours swirled that Doc wouldn't accept a deal there.
The Dodgers were not willing to part with either Chad Billingsley or Clayton Kershaw.
So the bottom line is, Doc is still a Blue Jay, his trade value is now significantly lower than it should be, all because Ricciardi bunlged every aspect of this fiasco.
Think about how Halladay feels about how this all went down. He was basically thrown under the bus by his boss, left out to float in ace-pitcher purgatory. For his part, Roy could not have handled the situation any better or more classier. You would almost think he is a Canadian.
Now you have to wonder if there are feelings of resentment from Doc's side. How could there not be? Ricciardi basically said he wants to trade him, but if they don't, the team will have him back for the first half of 2010, and then he'll definitely be on the move when the team is out of contention before Father's Day. Its gotta make a guy feel appreciated.
Everything will work out fine for Halladay anyway. He will move on to a better organization (any other team in baseball, as long as its not called the Pirates), pitch in meaningful games in September, and maybe the Jays will get him back in the twilight of his career, so he can retire a Jay.
It is sad that J.P. has had it come to this with the best Blue Jay of all-time. Doc deserves better.
And I won't even get into the $126 million Vernon Wells contract. Or the mediocre, underachieving record (616-619 as of July 31) the Jays have racked up in his tenure.
J.P. should be packing his office. At most, he has until the end of the regular season, but something tells me, he will get his walking papers sooner rather than later.
Here's hoping.
Posted by Mark! at 6:46 PM